Probably my biggest takeaway from the Zero Rally was experiencing the importance of charging infrastructure. I must admit that I was previously somewhat skeptical of the “range anxiety” issue, or the worry that an electric vehicle (EV) will run out of juice and strand you somewhere you cannot recharge. In a gas car, it takes some serious human error to run into this problem (“I’m sure we can make it!”), and I figured I would be immune to the supposed stress. True, the distance range of most EVs on a full charge has not yet reached the range of most internal combustion engine cars on a full tank, but I thought the hullaballoo about EV range anxiety was, to some extent, an irrational fear. Not so, I would now argue, but fortunately there is a cure. 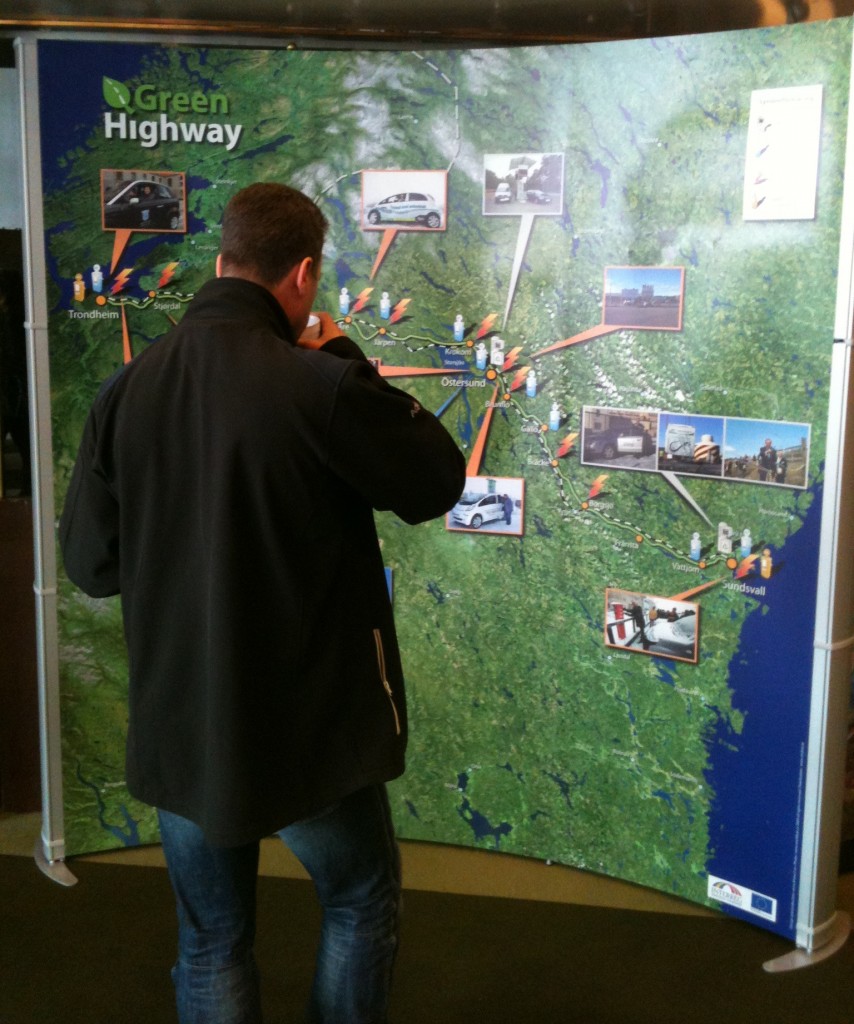 A Rally participant checks out the map of the Green Highway from Sundsvall, Sweden to Trondheim, Norway

Different Mentality
Having now been at the wheel while watching the battery miles (kilometers) click down, I can testify that the security of knowing there are charging options between points A and B is crucial to the driving enjoyment of an EV. By contrast, seeing the “low gas” warning come on in a typical car as the fuel tank approaches empty is more an annoyance than cause for concern. Since there are gas stations near almost every highway exit or major intersection, you’re rarely in trouble. But when your EV tells you how much farther it can take you, you don’t lament the inconvenience of having to stop at a station – you may wonder if there is one. To avoid searching aimlessly, at least in the United States, you can consult the DOE’s comprehensive map of electric charging stations or use one of the many available smartphone apps, such as offerings from Recargo or ChargePoint.

Better Safe than Sorry
You don’t want just enough charging stations to make the journey feasible – you want more than what would be minimally sufficient, as unexpected circumstances may require it. Let’s say, hypothetically, you forgot to charge completely the night before, or couldn’t resist driving aggressively on the hills. Perhaps you got lost and drove extra miles backtracking and searching for your destination, and maybe you failed to put the Nissan Leaf into “Eco” driving mode to extend its range. OK, imagine you did all of these things (maybe I did, maybe I didn’t…) and quickly you’ll see the benefits of having ample charging stations available. It will still take some time to figure out the optimal ratio of EVs to charging stations, but for now we should continue efforts to get the first pieces in place, as the Scandinavian Green Highway has done, and make sure there is a margin for errors in drivers’ range calculations. 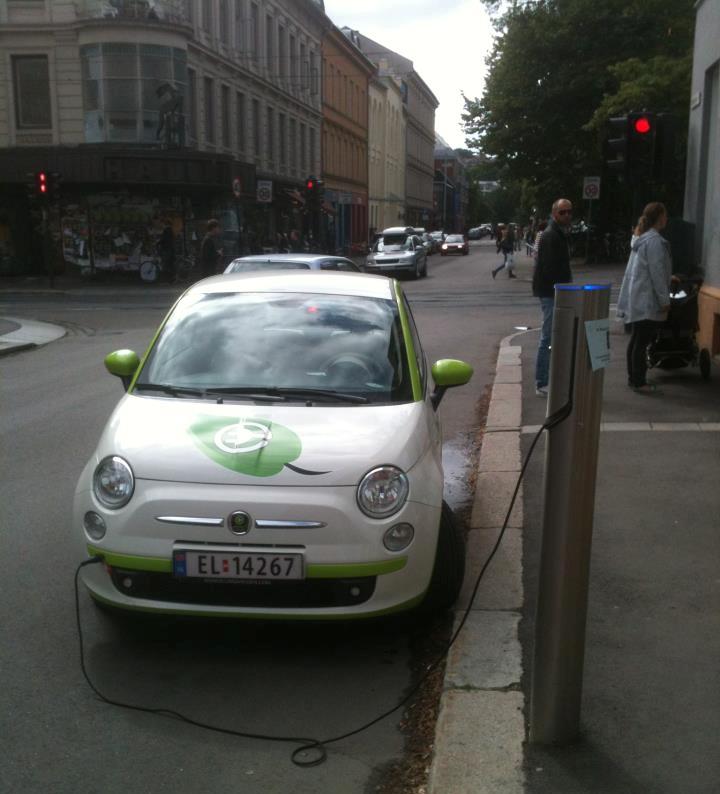 A public charging station in the vibrant Grünerløkka neighborhood of Oslo

Creating Range Assurance
It bears repeating what has been pointed out by many other voices on EVs: battery electric cars on a full charge can already meet the typical daily driving needs of most people. Charging an EV overnight to full power will enable most people to enjoy an all-electric, round trip commute plus ordinary errands without needing to plug in. Efforts in places like California, which recently announced big plans to roll out electric charging infrastructure, will directly address the issue of range anxiety while making the state “EV-ready”. Charging stations which dot streetscapes and parking lots can enable EV owners to top up while working or shopping, whereas fast charging along major highways will lend the freedom to drive hundreds of miles away from home. Has somebody coined the term “range assurance” yet?

As I wrote in my previous blog, I was pretty darn stoked about participating in this year’s Zero Rally across Scandinavia’s Green Highway. It did not disappoint. I got to drive my first electric vehicle (EV) and hydrogen fuel-cell vehicle (FCV) in real-world conditions, and interact with a cross section of Norway’s and Sweden’s auto enthusiast community. Now that the dust has settled, here are some immediate impressions about cars and about people. 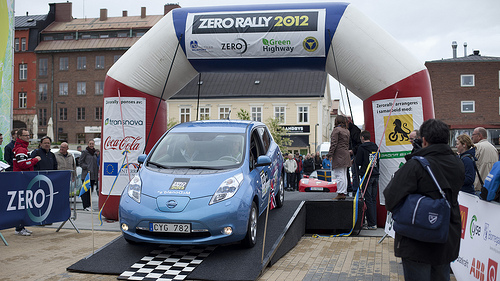 EV’s and FCV’s drive remarkably like “normal” (internal combustion engine) vehicles, and getting used to the small differences was almost too easy. Within minutes of taking the reins on a Nissan Leaf for some highway cruising, I forgot I was driving anything fundamentally different than the vehicles I’ve been using for the last decade. The reminder would only kick in upon acceleration, with the whirring, jet engine sound of the electric motor to accompany the peppy boost. Indeed, the most noticeable difference in terms of driving experience with these cars seems to be the powertrains’ sound effects, which were also quite futuristic in the Mercedes Benz B-Class FCV. I had conversations with several people about the concerns over these cars being too quiet (just like hybrids when they’re in all-electric mode), and thus a hazard to pedestrians accustomed to hearing an oncoming vehicle’s engine. In case this issue was plaguing you, don’t worry – research, legislation, and a variety of sound systems in different cars are dealing with this. I noticed the sounds in the Nissan, and I look forward to hearing the Fisker Karma’s mix between “a Formula One car and a spaceship.”

Don’t just take my word for it

A widely identified hurdle to the adoption of electric vehicles is the awareness factor, and the Zero Rally took full advantage of celebrity participants and media to get the message out. The response generated by the participation of popular figures like Norwegian gold medal skiers Bjørn Dæhlie and Aksel Lund Svindal, Swedish rapper Timbuktu, and singer 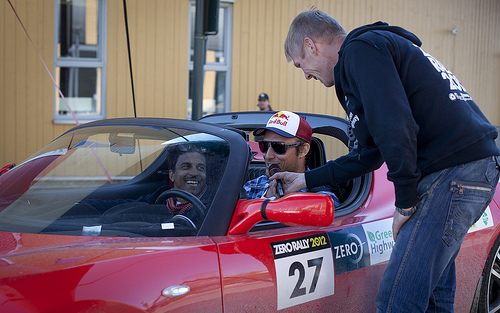 Tone Damli really kicked up the profile of this event. I was quite impressed, actually, with how informed and sincere these celebrities were in terms of the purpose of the Rally. It was more than just a photo shoot for them, and I think it helps that electric cars provide an opportunity to broadcast an environmental message and have fun. I guess I shouldn’t be so cynical about Justin Bieber’s chrome-wrapped Fisker Karma since it might help make EVs seem cool, though I’m sure there are spokesmodels in the U.S. who could reflect on their EV experience thoughtfully, as in Aksel Lund Svindal’s blog.

The Zero Rally was a personally inspiring event, especially when I think about all of the people working in different ways to make a clean vehicle future possible. I met local politicians in Östersund, Sweden who are motivated to ensure charging station plans work out. I talked with car racing representatives who believe the electric revolution has staying power. I also shrugged along with the Koreans from Team Hyundai whenever the announcements were made in Norwegian. It’s going to take a continued coordinated effort from industry, government, and a faithful public to get to the point where a car rally is zero emissions by default, and there will be ups and downs in the meantime, but I’m glad to report that the will and the way appear to be coming together. 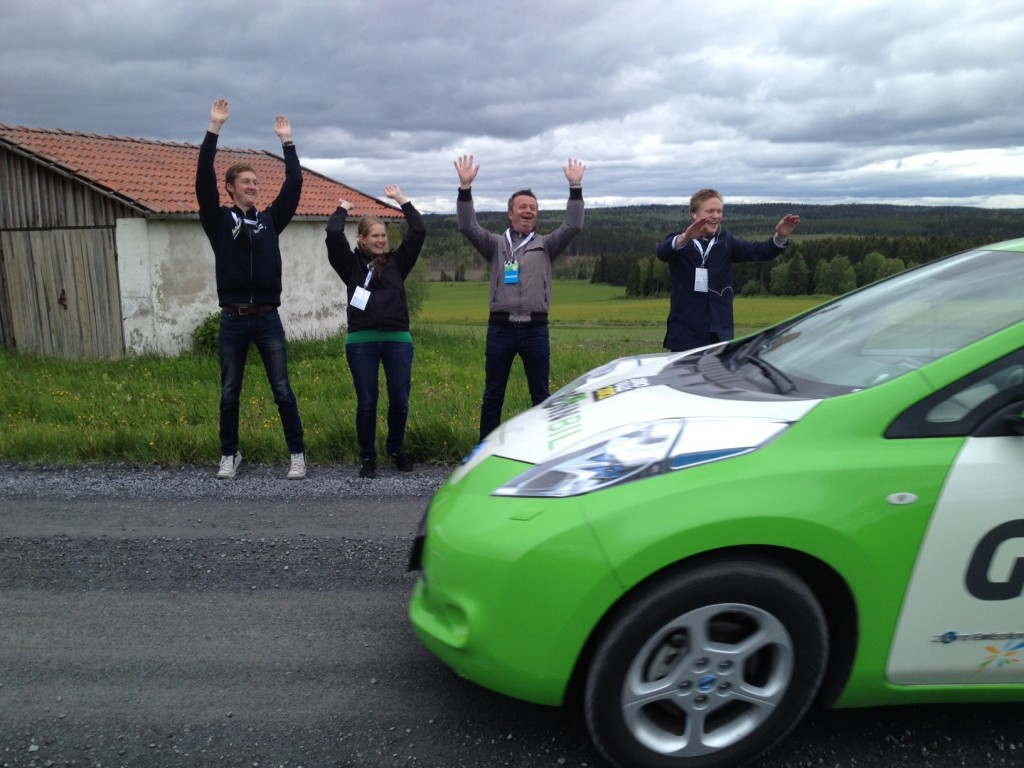 Waves of enthusiasm at the Zero Rally as the cars drive through the Swedish countryside (photo credit: Jenny Simonsen) 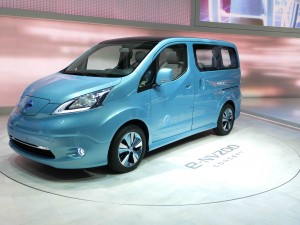